This is Generation Eleven of the Main Ancestral Line. Use the links to go forward and back and the main ancestral chart to navigate. Names in bold type continue the ancestral line down.

This generation of the Breach family lived in Yorkshire. Places include, Doncaster, Leeds, Malton and York. 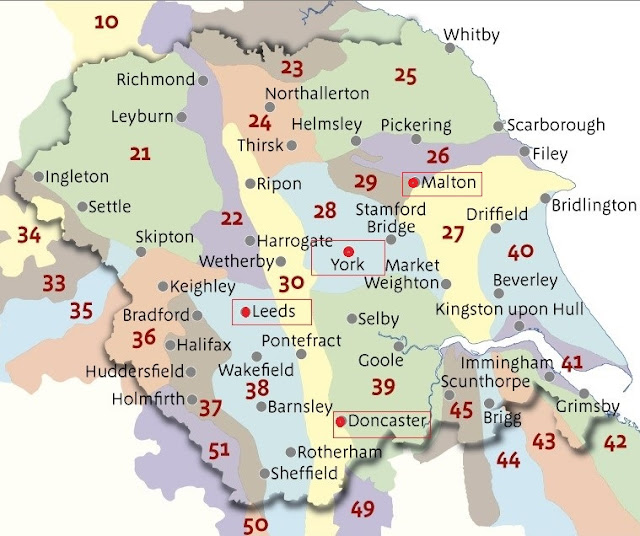 David Percy Breach (or ‘Percy’ as he was known) was born on the 25th of November 1907 in York. He was the youngest of three children born to Albert Walter Breach and Helen Lavinia Read Hall.

After leaving school Percy worked at Potter’s Motor Service in Leeds from March 1924 to August 1925. A letter of reference from the owner of the garage survives to confirm these dates. The next evidence of work history that I have is another reference letter from The Middlesbrough Ship Repairing Co Ltd dated October 1927. It seems he spent a year there, training in engineering before leaving to set up his own business. Percy then moved to Malton in North Yorkshire where he opened his first garage.

He met and married Nora Fox (b. 1910) (daughter of Tom Fox and Emma Harper) on the 29th March 1930 at Kirkby Misperton, North Yorkshire. Their only son, David Norman was born in September that same year.

The family moved to Leeds for a short time in the 1930's where Percy worked as a garage foreman. During the mid 1930's the family moved to Wheatley Hills, Doncaster and Percy took a job at nearby Brock's Garage on Thorne Road.

In 1937 the family moved for the final time to Fairfield Road, Doncaster. Percy worked at two garages nearby, Roodhouses and the Royal Blue Garage on York Road.

During the second World War Percy became a volunteer fireman with the Auxiliary Fire Service in Bentley. He was later put in charge of fire engine maintenance at Silver Street in Doncaster and also Rotherham.
After the war Percy opened a new business in Bentley called D.P. Breach. When his son David joined him in the business, it was renamed D.P. Breach & Son.

On Percy's retirement the garage was passed on to son David.

Percy Breach died of a heart attack on the 9th of November 1974. He was sixty six.

She worked as a butcher’s assistant before marrying David Percy Breach on the 29th of March 1930. Her only child, David Norman was born that September.

Nora enjoyed sewing and crafts and was active until her death from a sudden heart attack on January the 21st 1988, she was seventy seven.

David and Nora had one child as follows:

David was born on the 24th of September 1930 in Malton, North Yorkshire. He married Muriel (living) in 1961 and settled in Arksey near Doncaster in South Yorkshire.

Click here to continue to the next page for Generation Twelve.