This branch merges with the Fox line (AL8)  before joining the Main Ancestral Breach Line through David P Breach (b. 1907) and Nora Fox (b. 1910) (Generation Eleven). Names in bold type continue the ancestral line down.


The Harper family had their origins in North Yorkshire before some migrated south to Derbyshire. 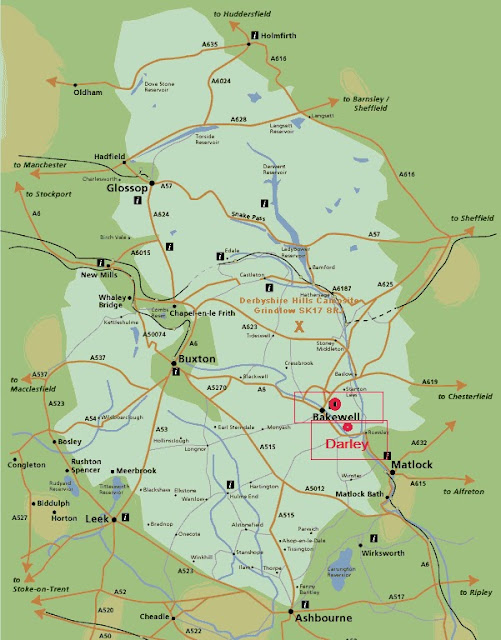 
First Branch Generation
AG1 - Thomas Harper and Jane Smith 1791 – 1885
Thomas was born in 1797 in Old Malton, North Yorkshire. He was an agricultural labourer and married Jane Smith (b. 1791 in Bulmer) on the 5th of September 1818, in Old Malton. They lived in Ryton, which is near Malton. They had six children as follows:

On the 1851 census daughter Hannah (now Jackson) is seen back with her parents, widowed at the age of thirty two, she was working as an agricultural labourer like her father.

By the age of sixteen, Mary Ann working as a house servant for farmer William Barker in Great Habton.

Mary Ann gave birth to an illegitimate daughter Emma (see below) on the 25th of November 1870. When the census was taken, four months later Mary Ann and Emma were living in a shared house in Wharram-le-Street.

Mary Ann had another illegitimate child, John in 1873 in Malton, North Yorkshire. A few months later, on the 25th of August 1873, she married James Mead (b. 28th August 1839) in Malton. After marrying, she seems to have left her daughter Emma in the care of her mother, Mary while she, her new husband and baby son moved to Darley in Derbyshire.


James Mead worked as a farm labourer, and Mary Ann had three  children together, all born in Darley, Derbyshire, as follows:

Mary Ann died on the 10th of February 1883 in Bakewell, Derbyshire of 'acute Phthisis exhaustion', which was another description for Tuberculosis.

James Mead remarried just under a year later, on January the 21st 1884. He married Louisa Willmot (b. 1840 Darley, Derbyshire).

His new wife already had an illegitimate son, Leonard Willmot, born in 1881 in Bakewell. A daughter, Edith Alice was born in the July quarter of 1883; she was registered a 'Mead' although James and Louisa didn't marry until the following January. This leaves question marks over her parentage which cannot be answered at the moment.

Fourth Branch Generation
AG4 - Emma Harper 1870 - 1950
Emma was born on the 25th of November 1870 in Great Habton. She was the first illegitimate child of Mary Ann Harper. When Emma was about two and half years old, her mother gave birth to an illegitimate son, John and shortly after married James Mead.

For reasons not understood Emma was left in the care of her Grandmother Mary while Mary Ann, her husband and son moved to Derbyshire.

Emma Harper continued to live in the Malton area and gave birth to an illegitimate daughter, Mary Ann in 1890. The 1891 census shows that Emma was working as a general domestic servant at a farm in Little Habton. Her daughter Mary Ann was in the care of Jane Davison (see below), Emma's Aunt in nearby Great Habton.

Emma continues the ancestral line down, see link below.


From the Second Branch Generation above
Jane Harper 1849 - 1940
Jane was born on 27th May 1849 in Great Habton to John Harper and Mary Brocklebank.

In 1873 Jane gave birth to an illegitimate daughter Anne Maria.

She married Thomas Davison (b. 1856) in 1888 and they settled in Great Habton. In 1889 Jane gave birth to a daughter Mary Elizabeth Davison. 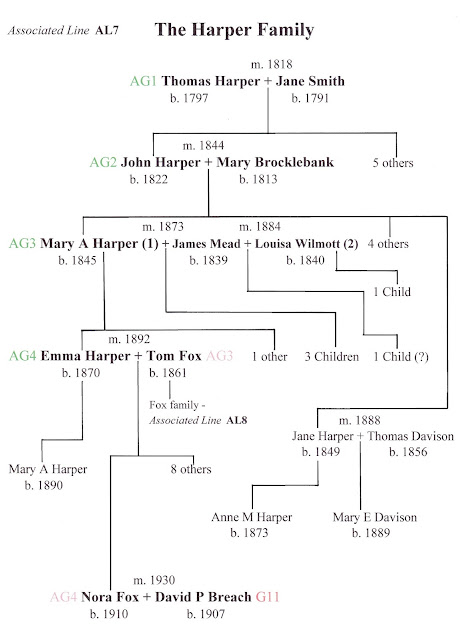