This Branch line follows ancestors of Mary Cheal (b. 1818), wife of Richard Breach (b. 1814) from Generation Eight of the Main Ancestral Breach Line. Names in bold type continue the ancestral line down.

Ann died in 1766 but there was no record of George’s death.

Edward and Jane had nine children as follows:

John was born in 1816 in Westdean. John worked as an agricultural labourer.

David was born in 1820 in Westdean. David worked as an agricultural labourer.

Joseph was born in 1822 in Westdean. He never married and remained with his parents until the 1871 census where I found him boarding with George Breach (b. 1837) (son of Henry Breach and Mary French) and his wife Selina Kemp Marchant (b.1835) (daughter of Thomas Marchant and Sarah unknown), while working as an agricultural labourer (Joseph and George had been neighbours in childhood). By 1881 George and Selina had moved to Friston and Joseph, now a pauper was found in the Union Workhouse, Eastbourne where he probably died in 1883 aged sixty two.

Charles was born in 1825 in Westdean.

Edward was born around 1827 in Westdean. He worked as an agricultural labourer at first but by the 1851 census he was working as a shepherd at the farm of John Elles in Westdean. He married his first cousin Eleanor Cheal (b. 1832) (daughter of Thomas Cheal and Sarah Marchant) (see Third Branch Generation above) in 1850 and had ten children as follows:

Eleanor died sometime before the 1891 census.

Ann was born around 1831 in Westdean. She is on the 1841 census with her parents, aged nine but I could not locate any other returns for her until 1891 where I found her listed as Ann Mockett, a widow living with her brother Edward (b. 1827) after the death of his wife Eleanor Cheal (1832). I then found her working as a servant in Eastbourne on the 1901 census. I later found that Ann had married Henry William Mockett (b. 1824 in Selmeston, Sussex) in 1855 in Eastbourne. Henry died in 1884 in Lewes. No children have been found. 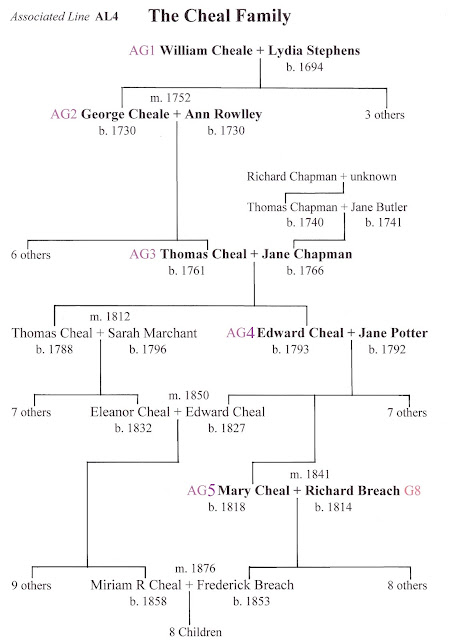