This branch line merges with the Hall  branch line (AL6) which then joins the Main Ancestral Breach Line through Albert W Breach (b. 1872) and Helen L R Hall (b. 1873) (Generation Ten).


The Read family lived in the Furneux Pelham area of Hertfordshire. 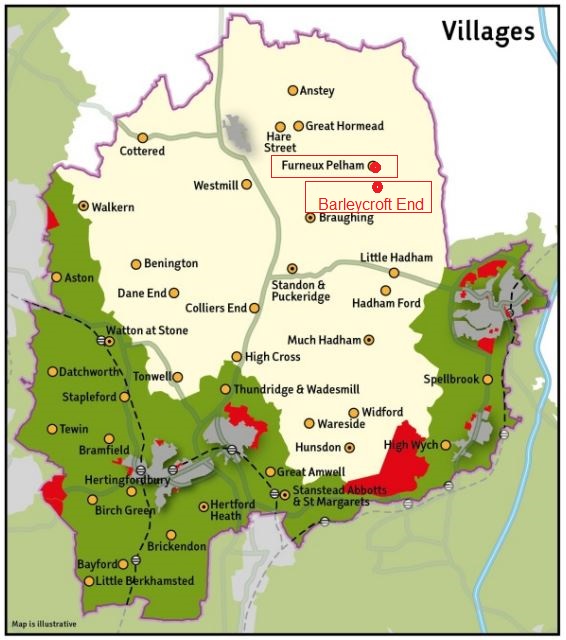 I found records for this family using a combination of all three spellings. So to avoid confusion I have chosen to use the most prolific spelling found, 'Read' for this post.

AG1 - Henry Read and Sarah Thurgood 1772 – 1864
Henry was born in 1778 in Furneux Pelham, Hertfordshire. He worked as an agricultural labourer and lived in Church End / Street Furneux Pelham. He married Sarah Thurgood (b. 1772) (daughter of Francis Thurgood and Grace Malyon) on the 21st of July 1799. They had seven children as follows:

By 1861 Henry was living with his son John at Pheasant Hall, Furneux Pelham, and at eighty three he was described as a ‘pauper’. He died on 17th February 1864.

John was born in 1812 in Furneux Pelham, the son of Henry Read (b. 1778) and Sarah Thurgood (b. 1772). He was an agricultural labourer according to the census returns I have, however, on his daughter Susan’s marriage certificate she describes him as a shoemaker, a fact I have not been able to verify.

John married Mary Hilton (b. 1807) (daughter of John Hilton and Sarah Bent) on the 11th of February 1833 in Great Hormead, Hertfordshire, and they lived at Pheasant Hall near Furneux Pelham. Pheasant Hall is marked on an old map and looks like a large estate; there appeared to be around three families resident there, all agricultural labourers, so it may have been a farm. John died in 1880 and Mary died in 1874.

John and Mary had eight children as follows:

1. Henry
The eldest son of John and Mary Read was born in 1833 and worked as a farm labourer.


3. Eliza
Eliza was born in 1837. I found her on the 1871 census in Kensington, along with her sister, Susan. She was a widow with the surname ‘Pope’ (I wasn’t able to find any records for her husband). Eliza worked for the Froude family as a nurse (possibly a children’s nurse).

4. George
George was born in 1840 and worked as a farm labourer.


AG3 - Susan
Susan was born on the 15th of June 1852 in Furneux Pelham. On the 1871 census, eighteen year old Susan was in Kensington, London working as a housemaid for the Froude family. Her sister, Eliza Pope was also working there as a nurse.

In 1873 Susan gave birth to her illegitimate daughter Helen Lavinia on the 8th of April. She was born in Queen Charlotte’s Hospital, Marylebone Road which is quite some distance from her home at 93 St Anne’s Road, Stepney, so why she ended up in this hospital is a mystery, especially as almost all babies were born at home in this period. Also on the birth certificate, Susan now described her occupation as a schoolroom maid.

The next record I have for Susan is her marriage to Pearey Hall (b. 1856) (son of Andrew Hall and Margaret Pearey) on the 8th of January 1876. According to the information on the marriage certificate Susan was living in Cornhill, Northumberland and she was a nurse.

Susan had a further four children with Pearey before her death in 1894, at the age of 42.

Looking for the mother of Helen Lavinia Read proved to be rather confusing. Below, I give an account of the difficulties that arose and how I solved them.

The certificate stated that Laura was working in London in 1873 when Helen was born, so the obvious next step was to check the 1871 census to see where Laura Susan was then. I soon discovered that there was no such person as Laura Susan Read in the whole country! I tried to find Laura Read but none were listed in London so I tried Susan Read and found Susan ‘Reid’ in service in Kensington, London. Her age matched up with records I had for her when she married Percy Hall (The Hall’s were researched first) so I decided she was the Susan I was looking for. I noted that she was born in Furneux  Pelham in Hertfordshire, which is very near to Buntingford where Percy’s wife Susan said she was born on the 1881 and 1891 censuses. This meant I could now look back at earlier censuses to find her family.

I was still confused by the ‘Laura’ on the birth certificate so while I was looking for early censuses I looked for both Laura and Susan separately. I found two families in Furneux Pelham named Read, one had a daughter called Susan who was born in 1852, and the other had a daughter called Laura who was born in 1853. I sent for both birth certificates to confirm that neither of them possessed both names (they didn’t) and decided to research both families.

I am quite confident that the Susan Read above is Helen’s mother; it certainly isn’t Laura as proved by looking at her family below.

George Read (below) was the brother of John Read (from the first Branch Generation, above).

George and Jane lived at Great Hormead when the 1841 census was taken. The family then moved to Furneux Pelham by the time their third child was born in 1844. John worked as a master shoemaker employing two men in 1851.

George and Jane had eight children as follows:

Susan was born in 1834 in Great Hormead. It may be the case that she was an illegitimate daughter of Jane's as she was born a year before the marriage to George. No birth record could be found.


3. Mary Ann
Mary Ann was born in 1844 in Great Hormead. It appears she never married and is to be found on the 1881 census still living at home and working as a dressmaker.


4. Jane
Jane was born in 1847 in Furneux Pelham. I found that Jane was missing from the 1851 census of her parents so I carried out a separate search and found that she was with her cousin John Malyon (b. 1826) (son of William Malyon and Sarah Greenhill) in Chipping Buckland, Hertfordshire on census night.


5. William
William was born in 1849 in Furneux Pelham he became a boot maker.

They lived in Barleycroft End and had two children,


7. Laura
This is the Laura Read who was the subject of the confusion surrounding Helen Lavinia's mother. I searched her story as thoroughly as I could and found that she could not be Helen’s mother at all.

By 1881 they had moved to Lambeth, London and Alfred worked as a boot maker.

The 1891 census found the couple in Sutton, Surrey with Alfred ‘living on his own means’. They had a nephew staying with them, William R Lawrence (b. 1871), a boot maker’s assistant.

By the 1901 census they had moved to Ipswich in Suffolk and Alfred was described as a property owner. They had a niece staying with them, Dorothy Mace (b. 1894) who was the daughter of Laura’s sister Ada.

Laura and Alfred don’t appear to have had any children of their own.

Of course the question remains, why did Susan Read call herself 'Laura Susan' on her daughter's birth certificate? Maybe it was to preserve her anonymity as she had given birth to an illegitimate child. Or maybe there was another reason. I guess this will remain a mystery.

The 1891 census found them at Bassingbourn, Cambridge where James was working as a Farm Bailiff. Also on this census are Elizabeth M Read (b. 1878), daughter of her brother Charles Read and his wife Elizabeth Allen, and Ada’s mother Jane Pryor (b. 1817) who was a widow of seventy four.

The family moved around quite a bit as proved by the birth places of their three children:

The 1901 census found them in Ipswich where James was working as a sheep dresser (in a slaughter house).

James died in 1916 in Hendon, Middlesex, and Ada died in 1934 in Welligborough, Northhamptonshire. 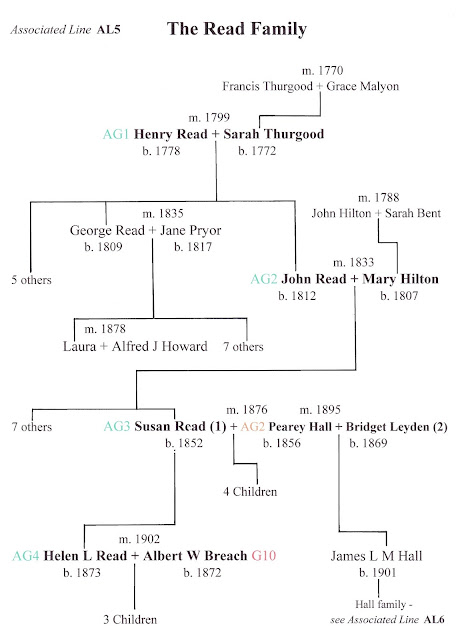