This branch line merges with the Harper line (AL7) before joining the Main Ancestral Breach Line through David P Breach (b. 1907) and Nora Fox (b. 1910) (Generation Eleven). Names in bold type continue the ancestral line down.


The Fox family lived in an area of Yorkshire called 'Ryedale'.  Before branching off to other parts of of the country. Places include, Barugh, Great Habton, Malton and Ryton. 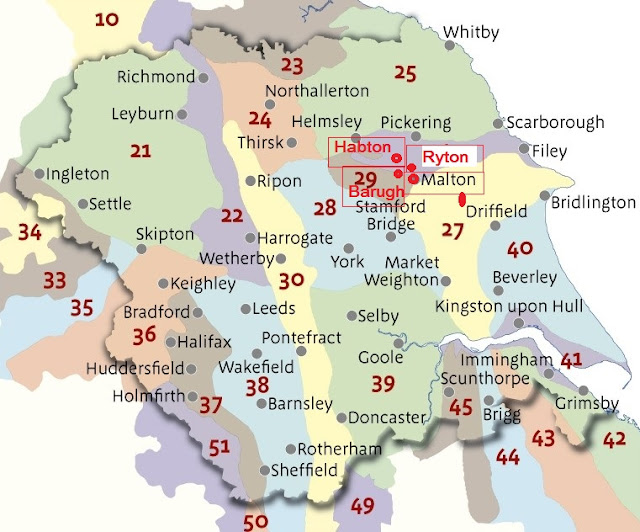 He married a widow, Elizabeth Pearson (b. 1827) (daughter of Joseph Jackson and Ann unknown) in 1860. Elizabeth already had three children by her first husband, but she went on to have three more with George.

George worked as an agricultural labourer and the family lived at Woodend Cottages in Ryton, however, by 1881 they had moved to nearby Great Habton.


Elizabeth Pearson (nee Jackson) was born in 1827 in Swinton, North Yorkshire, the daughter of Joseph Jackson and Ann unknown.

Elizabeth gave birth to an illegitimate daughter, Maria, in 1847. Maria was born in Malton Workhouse, it wasn’t unusual for unmarried women to find themselves at the mercy of the workhouse when pregnant, especially if their family shunned them.

Two years later, in 1849 Elizabeth married Francis Pearson (b. abt 1823 in Cloughton, North Yorkshire) in Malton. They lived in Swinton, near Malton and Francis worked as an agricultural labourer. They had three children as follows:
Francis died in 1858 at around the age of 35.

Elizabeth married George Fox two years later in 1860, and had a further three children:
Elizabeth's daughter Maria, eventually took on the 'Pearson' name, and had an illegitimate son, Frank H Pearson in 1885. The 1881 census for George and Elizabeth shows six year old Frank, who was with them at the time.

Third Branch Generation
AG3 - Tom Fox and Emma Harper 1861 - 1950
Tom was born on the 19th of May 1861 in Ryton, the son of George Fox (b. 1835) and Elizabeth Jackson (b. 1827). tom and his two younger brothers lived at Woodend Cottages with his parents. He worked as a labourer on various farms before he married.

On the 19th of December 1892 Tom married Emma Harper (b. 25 Nov 1870) (daughter of Mary Ann Harper and unknown father), a single mother from nearby Habton. Emma had a two year old illegitimate daughter, Mary Ann (b. 1890). Following the marriage Tom and Emma lived at White Cottage, Barugh Lane in Barugh, North Yorkshire. Tom worked as a carter on a farm and the couple had nine daughters together.

Tom died on the 20th of January 1942, I have been told that he died suddenly while clipping a hedge. His death certificate states that he died of cardiac failure, gastritis and senility.


Emma Harper was born on the 25th of November 1870 in Great Habton, North Yorkshire. She was the first illegitimate child of Mary Ann Harper (b. 1845).
Emma’s life can be tracked through the census returns beginning in 1870 at only four months old, when she and her mother were living in a shared house in Wharram Le Street. Emma is named Emley on the census, either a mistake or a pet name but as she appears on the 1881 census as Emley again it seems likely that it was a pet name; on this census she is with her Grandmother Mary Harper, in Great Habton.

As the census only shows who was where on one particular night I don’t know if she was living with her Grandmother or if she was just visiting; but as later records show, she seems to have stayed in the Malton area and does not appear on any other censuses with her mother. It seems her mother had married, moved to Derbyshire, and given birth to other children by the time of the 1881 census. From this evidence I get the impression that Emma was brought up by other family members, rather than her mother.

In 1890 Emma gave birth to an illegitimate daughter, Mary Ann. On the 1891 census Emma aged 21, was working as a general domestic servant at a farm house in Little Habton, while her nine month old daughter was being cared for by her aunt, Jane Davison (b. 1850) (daughter of John Harper and Mary Jackson) in nearby Great Habton.

Emma married Tom Fox on the 19th of December 1892. They lived in Barugh and had nine more daughters together.

Emma died on the 14th of February 1950 in the Ryedale district of Yorkshire. Her death certificate states she died of myocarditis degeneration and senility.

Tom and Emma had ten children altogether as follows:


1. Mary Ann Harper/Fox
Mary Ann (Emma’s daughter) was born in or around July 1890 (her father was unnamed). After finding her on the 1891 census in the care of her Mother’s Aunt Jane I can only conclude that Jane was taking care of Mary Ann while Emma worked. Tom Fox brought Mary Ann up as his own daughter and she is listed as a ‘Fox’ on the 1901 census. The 1911 census shows Mary Ann aged 20 and still living in the family home. Mary Ann never married and died in 1837 in Little Habton, Yorkshire.

2. Fanny Elizabeth
Fanny was born on the 31st July 1893 in Great Barugh, near Pickering. She married John Dudding (b. 2nd March1891 in Malton) in 1915, and lived in Malton. They had five children as follows:

3. Edith Annie
Edith was born on the 24th of August 1894 in Great Barugh. She married Joseph Thompson (b. 17 Mar 1894) from Blackburn in Lancashire on the 24th of January 1920 in Lancaster. They had two children, born in Morecambe, Lancashire as follows:


5. Elsie May
Elsie was born on the 5th of June 1897 in Great Barugh. She married Richard Harry Baron (b. 21 Mar 1894) (son of Wilson Baron and Emma Horner) in 1917, in Malton. They lived at Bempton, near Flamborough Head and had five children as follows:


7. Ida
Ida was born in March 1901 in Great Barugh. She married William White in 1925 in Bridlington. No trace of any children could be found. Ida died in 1958, in Bridlington. 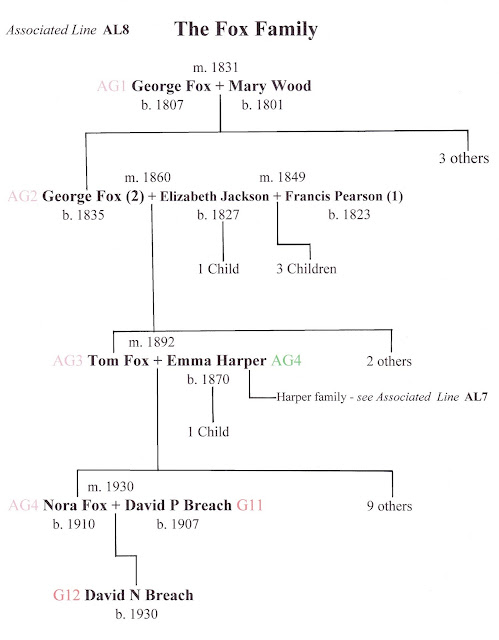