This branch line merges with the Read branch line (AL5) before joining the Main Ancestral Breach Line through Albert W Breach (b. 1872) and Helen L R Hall (b. 1873) (Generation Ten). Names in bold type continue the ancestral line down.


The Hall family have their origins in Northumberland before migrating south to Yorkshire. 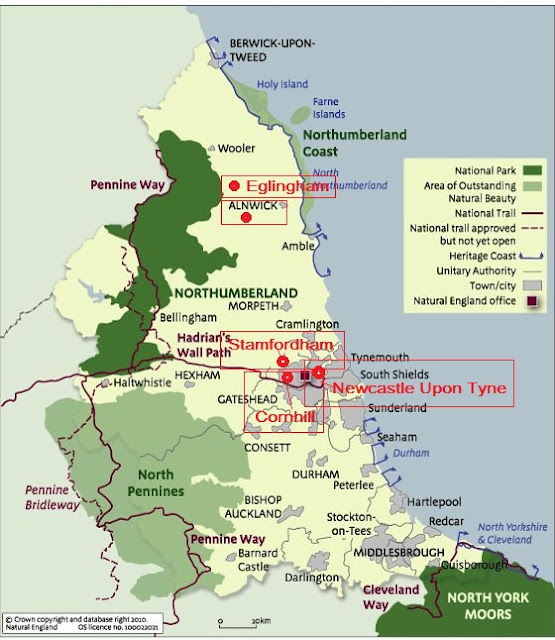 First Branch Generation
AG1 - Andrew and Margaret Pearey 1815 – 1898
Andrew Hall was born on the 12th of April 1819 in Eglingham, Northumberland. His parentage has been difficult to research, but it is known from census returns that his mother was named 'Ann'. No definite records for his father have been found.

Andrew married Margaret Pearey (b. 1815) in about 1842, although the marriage register hasn't been found. Andrew appears to have taken over the family home of Percy’s Cross as he is listed on the 1851 census as head of the household, his widowed mother was living with Andrew and his new family.

Andrew was employed as a gamekeeper throughout his life; according to the censuses from 1841 to 1901 he was described as a mole catcher, a mole killer, a mole and rabbit catcher, and an agricultural labourer.

The last record I have of Andrew is the 1891 census, when at the age of seventy one, he was a retired labourer.

Andrew died in 1891 in Alnwick, Northumberland.

Margaret Pearey was born in 1815, in Doddington, Northumberland, the daughter of George Pearey and Jane Cryle.

Margaret died in 1898 in Alnwick, Northumberland.

Andrew and Margaret's children are as follows:

By the 1870’s Peary was working as a gamekeeper at Cheeseburn Grange, Stamfordham,  east of Newcastle Upon Tyne. He married Susan Read (b. 15 Jun 1852) (daughter of John Read and Mary Hilton) on the 8th of January 1876 in Ponteland Register Office, Northumberland.

On the 1881 census Peary and Susan were living in Moorsholm, between, Middlesbrough and Whitby in North Yorkshire. Peary was a Police Constable and they had three children of their own, as well as Susan’s illegitimate daughter, Helen Lavinia (b. 1873). The family must have moved around quite a lot as most of their children are registered in different places.

By 1891 the family had moved to Brompton, Northallerton, North Yorkshire. They also had another child by this time.

Susan died in 1894 at the age of forty two while the family were still in Northallerton.

Peary, whose name changed to Percy in later records, died in 1929 in Thirsk.

In the early 1870's Susan worked as a housemaid and schoolroom maid in Kensington, London. She gave birth to an illegitimate daughter, Helen Lavinia Read in 1873.

She moved to Cornhill in Northumberland and became a nurse, and later married Peary Hall in 1876. Her daughter Helen Lavinia took on the extra surname of Hall after her mother married.

Susan had a further four children with Peary, before passing away at the age of forty two in 1894.

Peary (or Percy) was still a Police Constable on the 1901 census. He died in 1929 at the age of seventy three in Thirsk, North Yorkshire.


Peary and Susan had four children as follows:

On the 1901 census she was still living with Peary and his new wife Bridget (see below). At the age of twenty four she was working as a Lady’s Maid.

Margaret married Italian, Carlo Tagliasacchi around 1900, and they lived in Como, Italy for a time. It is thought they later lived in Gerrard's Cross, Buckinghamshire.


Elena worked as an interpreter and married Italian millionaire Andrea Pini in Aylesbury, Buckinghamshire on the 2nd of May 1964. They lived in Como, Lombardia, Italy.


2. John Reed Andrew
John was born in 1878 in Burneston near Leeming, North Yorkshire. He married Emily Harriet Hutchinson (b. 1878) in 1904 in Thirsk, and worked as a railway clerk in a goods depot. The couple had no children and John died on the 9th of June 1939 in Stockton on Tees, Co Durham. Interestingly, he also carries the Read name like his half sister Helen, although the spelling is different. Emily died on the 29th of January 1958 in Cleckheaton, Yorkshire.

3. Susan Henrietta
Susan was born on the 11th of July 1880 in Moorsholm, North Yorkshire. In 1901 she was working as a lady’s maid at Maunby Hall, Kirby Wiske (near Thirsk). She married George Robert Taylor (b. 10 Oct 1885, York) in 1914 in Thirsk. They had one son, George Percy, born on the 19th May 1915 in Tadcaster, Yorkshire. George Robert was a garage proprietor and they eventually moved south as in 1939 they were living in Aylesbury, Buckinghamshire, by 1959 they were living in Chalfont St Giles, Buckinghamshire. Susan died in 1959 and George died in 1982 in Bournemouth, Dorset.

4. George Percy
George was born in 1883 in Skelton, North Yorkshire. On the 1901 census he was an apprentice watchmaker still living with Percy and Bridget in Felixkirk. He married Annie Fisher in 1913 in York. George and Annie had two children:

Bridget was born on the 5th of December 1869 in Grange, County Sligo, Ireland, the daughter of Owen Leyden and Catherine Kivlehan. The 1891 census shows twenty two year old Bridget working as a laundry maid at the home of Sir Edmund Turton, a JP, Conservative politician and late officer in the Cavalry, in Upsall near Thirsk. She married Peary Hall just one year after his first wife Susan died. She gave birth to one child only, James in 1901 as follows:

James Lindley Macdonald
James was born in 1901 in Felixkirk, near Thirsk the son of Peary Hall and Bridget Leyden. He became a Reverend Canon and appears in the photo above. James never married and died on the 3rd of April 1973 in Thorner, Leeds, Yorkshire. 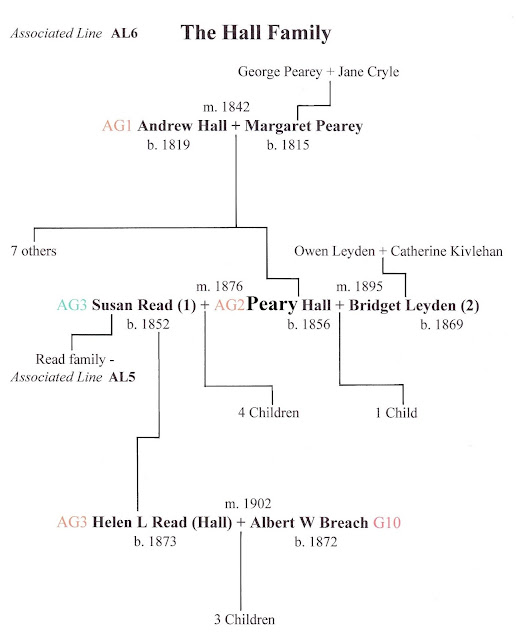 Note: - Some information previously displayed pertaining to earlier generations of the Hall family, has been removed as it cannot be verified.