This is a further branch of Branch Line B1, and follows the second son of John Breach (b. 1721) and Mary Sargeant (b. 1727). Names in bold type continue the ancestral line down.

This branch of the Breach family lived mostly in the Steyning area of West Sussex.


William married his second wife, Mary Tighe (b. 11 Sep 1857, Hackney, Middlesex) (daughter of Charles Tighe and Mary Ann Dale Stead) in 1891, in Bromley, Kent. They had five children, all born in Steyning as follows:
William Powell lived at Newham House in Steyning. He had inherited it from his first wife Mary Michell's family, and continued to live there with his second wife, until his death. He made some alterations to the house during his time there. He installed a wainscot dado in the dining room, which had been the front of the galleries in the local church. He also set up two discarded stone arched window frames in the garden, which had come from the south side of the church.

During his life William was a senior partner in the firm of G T Breach & Sons (Tanyard) (see Related Article 2). He was also a prominent townsman, a Justice of the Peace, a Trustee of the River Adur Navigation, a Commissioner of the Rape of Bramber of Bramber Sewage, and he was for many years, a governor of Steyning Grammar School. Further to this he was one of the first Directors of the Steyning Building Society after it was formed, and was elected as a member of the West Sussex County Council the year before he died. 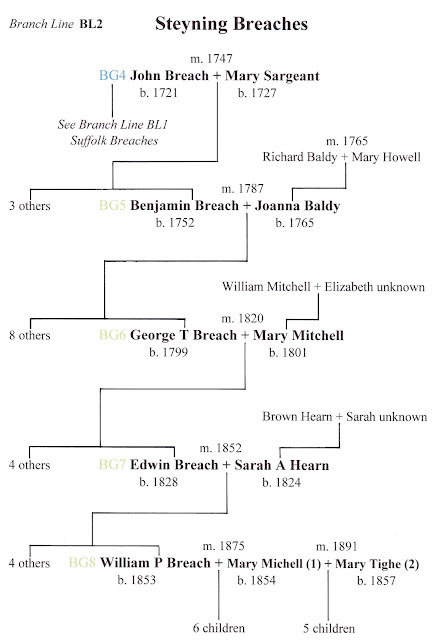 Many thanks to Bonnie Dunn for information contained in this post.