This branch line follows the sixth child of Richard Breach (b. 1814) and Mary Cheal (b. 1818) from Generation Eight of the Main Ancestral Breach Line. Names in bold type continue the ancestral line down.


This branch of the Breach family had their origins in East Sussex before emigrating to the United States of America. They settled in Chelsea, Massachusetts. 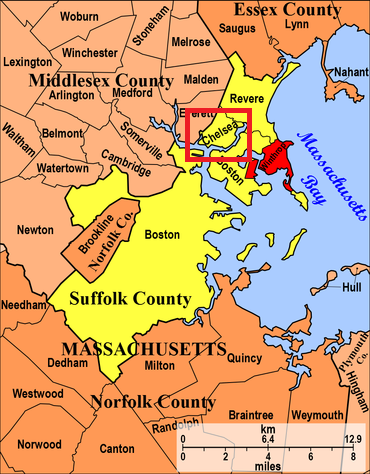 Ninth Branch Generation
BG9 - Albert Breach and Isabella Young 1851 - 1928
Albert was born in 1851 in Westdean, East Sussex, the sixth child of Richard Breach (b. 1814) and Mary Cheal (b. 1818). He worked as a shepherd boy and an agricultural labourer in his young life.

In 1871 Albert left the UK from Liverpool docks on the ship 'Batavia', arriving in New York, USA on the 4th of September.

Albert was a brick worker and their first child, Alberta Louise was born on the 30th of May 1879, but died on the 18th of August that same year of cholera.

Their second child Edith Eloise was born on the 22nd of January 1883.

Albert was granted Naturalization on the 20th of October 1888 and worked on the railways in his latter years and lived at number seven Cypress Street in Somerville, Mass. Albert died on the 24th of October 1905 in Somerville, of heart disease. Isabella was still living in Massachusetts by the time of the 1920 census. She died in 1928.


Edith E Breach and John Z Fortier 1876 - 1904
Edith Eloise Breach was the second and only surviving daughter of Albert Breach and Isabella Young. she was born on the 22nd of January 1883 in Somerville, Massachusetts.

Edith became a telephone operator and married John Zenas Fortier, (born 1876 in Waterbury, Vermont). They married on the 20th of January 1903 in Somerville, Mass. They had one child, Albert Laurence, born in early 1904. Tragically, Edith died on the 7th February 1904 from puerperal septicaemia, she was only 21.

Following Edith’s death John, who was a machinist foreman, moved back to Vermont with his son, but little Albert died on the 24th of August 1904 of cholera, six months after his mother. 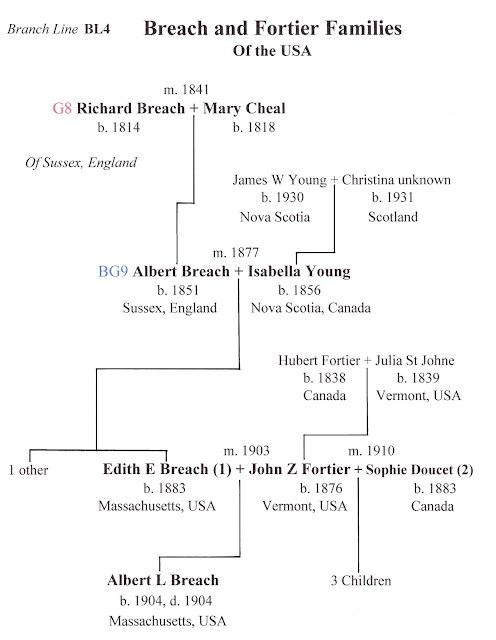