This branch line follows the second child of Richard Breach (b. 1776) and Elizabeth Dennis (b. 1777) from the seventh generation of the Main Ancestral Breach line. Names in bold type continue the ancestral line down.


This branch of the Breach family lived mostly in East Sussex. Places include, Battle, Eastbourne, East Dean and Willingdon.

In 1881 Lucy was living with her son, William John at Bradford Street, Eastbourne. She died on the 20th of May 1889, at 64 Cavendish Place, Eastbourne.

Thomas and Lucy had three children as follows:

Maria was born in 1846 in East Dean. She married Henry Thorpe (b. 1842 in Willingdon) (son of William Thorpe and Mary Pumfrey) in 1868, in Eastbourne, and they lived in Willingdon, Sussex. Henry worked as a railway porter, and they had seven children as follows:

William was born in 1847 in East Dean. William continues this line below

Elizabeth was born in 1849 in East Dean. She married William Thomas Hardwick (b. 1834 in Aston on Ingham, Hereford & Worcester) (son of John Hardwick and Mary Anne Nelmes), in 1888. They had no children but lived in Eastbourne and appeared to run a boarding house although the 1891 census is not clear on this. William died in 1900 in Battle, Sussex.


William and Caroline had thirteen children as follows:

William was born on the 17th of July 1882 in Eastbourne. He married Eliza Frances Griggs in 1897, in Brentford, Middlesex. He emigrated to South Africa.

Elizabeth was born on the 1st of October 1884 in Eastbourne. She never married and died on the 10th of April 1976.

Freedom was born on the 1st of January 1888 in Eastbourne.


Freedom continues this line below.

Caroline was born on the 24th of August 1890 in Eastbourne. She lived with Albert Emm but did not marry him. She died on the 4th of February 1971.

Jack was born on the 7th of September 1895 in Eastbourne. He married Dorothy Eliza Hillier (b. 24 Mar 1903, in Merstham, Surrey) (daughter of George Alfred Hillier and Jane Wimbleton) in 1923 in Croydon, Greater London. They had five children, born in Coulsdon and Kenley in Surrey as follows:

Clara was born on the 21st of November 1899 in Eastbourne. 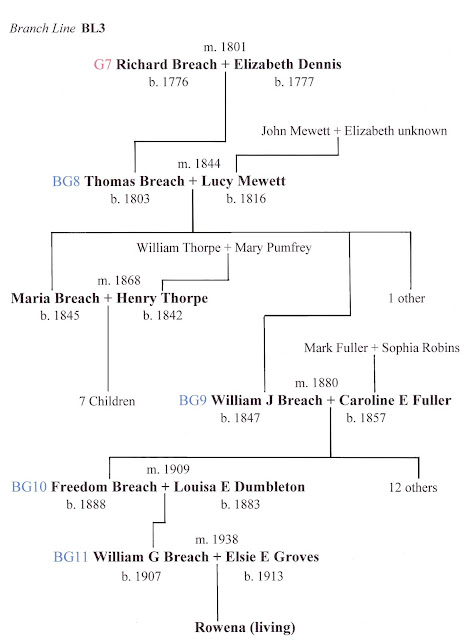 
Thanks to Rowena Breach  for much of the information contained in this post.